Note on authors and methodology

Challenges of food integration in Europe

Best practices on food and integration

In an era in which migration1 is increasingly at the centre of public debate and crucial to the decision-making process, more awareness on the existing links between food and migration is needed.

Against this backdrop, MacroGeo in collaboration with the Barilla Center for Food & Nutrition has conducted an analysis of the geopolitical impact of migration and food in the Euro-Mediterranean area2, whose results are comprised in this report on “Food and Migration”. Our study experimentally combines geopolitical analysis (resources, flows, migratory routes) and the analysis of food and nutrition, through a series of different and heterogeneous essays.

Our multidisciplinary research, comprising the contributions of several experts hailing from different fields of research and taking into account the multi-faceted push and pull factors behind migrations, aims to understand two main goals.

On the one hand, to bring food security and nutrition into the discussion surrounding the push factors of migration, also in relation to climate change impacts and to consider food value chains as a lever for local development.

On the other hand, to introduce a research agenda on the socio-cultural changes to food systems in countries of destination due to migration.

In the analysis of food and migration, three keywords are particularly relevant.

both migration and food emphasize interdependence and connections between different areas and different cultures, in terms of development, risks and opportunities.

They include paradoxes of over-representation of Trans-Mediterranean migration in comparison to intra-African migration, but also the over-estimation of the level of immigration by the public of several countries3.

we live in a time of transition, where adaptation will be progressive and affected by a series of variables. This has to do with strategies to cope with climate change, but also with geopolitical challenges. Therefore, public policy needs to take account of uncertainty to address the transition we live in.

Future international migration will be strongly influenced by demographic developments. The 1950-2050 demographic transition in Europe and Africa is unprecedented in its scale: Europe in 1950 accounted for 22% of global population, declining to 7% in 2050, while Africa will surge from 9% in the 1950s to over 25% of the world’s people in 2050. Demographic realities such as these can lead to uneven development which has the potential to disrupt our societies. It is here argued that a strategy of sustainable development, which adheres to the UN Sustainable Development Goals (SDGs)4 and of co-development (see Lucas 2014) could foster opportunities on both shores of the Mediterranean.

These disrupting trends are only in small part met by a parallel evolution of the socioeconomic reality, which hardly keeps pace – if it does at all – with demography. Africa’s economic growth, down to 2.2% in 2016 from 3.4% in 2015, presents stark regional differences: East Africa leads, with an estimated 5.3% in 2016, while Central and West Africa grew at just 0.8% and 0.4% respectively. North (3%) and Southern Africa (1.1%) are somewhat in between.

In this context, high unemployment remains a problem, particularly in middle-income African countries, reaching up to 50% in some of them, while in low-income countries low rates of unemployment often mask high levels of underemployment, which accounts for up to 80% of Africa’s labour force. Lack of jobs affects primarily young people, who suffer disproportionately from high unemployment, and given current demographic trends, this challenge will only become more critical. This situation contributes to Africa’s income inequality, one of the highest in the world.

The imbalance observed in the economic field reflects in the availability of a critical resource – water. Overall, Africa has about 9% of the world’s fresh water and 11% of the population, but there are significant differences in terms of water availability, with Sub-Saharan Africa more affected than other African regions by water-related challenges. According to the WHO (2015), 319 million people in Sub-Saharan Africa still had no access to an improved source of drinking water in 2015.

No less important than natural water scarcity are land and water acquisition activities carried out by foreign actors for farming/agricultural ends or as a form of commodity speculation. In recent years, foreign companies from the Gulf, India, China and Europe have been acquiring millions of hectares of lands (and related water resources) in Africa, with the Nile and Niger rivers as cases in point.

Given the abovementioned environmental, social and economic fragilities, external financial flows – foreign direct investment (FDI), aid and, crucially, remittances – remain of utmost importance for most of Africa. Remittance flows have grown substantially and steadily over the last years, accounting for 51% of private flows in 2016, compared to 42% in 2010. They rose from USD 11 billion in 2000 to USD 64.6 billion in 2016. Being less volatile than development aid and FDI, they represent a lifeline that sustains household consumption, increases foreign currency reserves and allow for investments.

For a comprehensive understanding of the “migration-- food nexus”, we jointly analysed countries of origin and countries of destination of migrants. Both food and migration emphasize the nexus: while in the history of the Mediterranean food routes, trade routes and migrant routes were closely intertwined, in today’s Trans-Mediterranean migration routes networks of goods smuggling, including food, often overlap with the activity of human traffickers.

Furthermore, climate change also affects food, water and land resources, spurring the migration of individuals and communities from the most vulnerable areas. Through a dedicated study developed by Euro-Mediterranean Center on Climate Change (CMCC) Foundation, we find evidence of various warming trends and the worsening of drought conditions. Specifically, in the trans-Mediterranean region climate change and variability can lead to a warming around 0.7°C within the next couple of decades, that will more than double in 2050. During the same timeframe, drought episodes are expected, at least, to double, with significant consequences for agriculture.

For the development of Africa, the link between nutrition and human capital is key, as there certainly is a vicious cycle whereby poverty nourishes hunger, malnutrition and high infant mortality. This cycle fosters an unchecked and unsustainable dynamic among the population.

In countries of destination, a pull factor of migration is demand for cheap labour in agriculture, as shown also by the episodes of exploitation in Southern Europe. Both NGOs’ activity and legislation bear witness to the urgency of tackling this issue.

The Agenda 2063 of the African Union Commission aims to consolidate the modernization of African agriculture and agro-business, in order to completely eliminate hunger and food insecurity by 2063. In the new framework of the 2030 Agenda for Sustainable Development, we should also consider the role of innovation in food value chains. Highlighting food value chains inefficiencies, we suggest possible solutions to enhance prosperity and environmental and social sustainability, through innovation and multi-stakeholders cooperation.

Food has the potential to create dynamics of inclusion, helping us to address the unprecedented migration challenge of the next decades. With this in mind, a number of best practices and case studies involving countries of origin as well as those of transit and destination of migration have been selected, providing insight from past experiences, and lessons for the future.

Through this rich mix of quantitative and qualitative data, this report will show that food and nutrition matter. Food and nutrition matter in the perspective of migrants, whether it be for the decision to flee their homes or during the routes of their journey, or in refugee camps. The “migration-food nexus” matters for all stakeholders engaged in designing sound integration policy.

1 The very definition of “migrant” is controversial. We will adopt the International Organization of Migration (IOM) definition. According to the IOM, a migrant is “any person who is moving or has moved across an international border or within a State away from his/her habitual place of residence, regardless of (1) the person’s legal status, (2) whether the movement is voluntary or involuntary; (3) what the causes for the movement are; or (4) what the length of the stay is” (https://www.iom.int/key-migration-terms, see also for the definition of refugee). According to the UN (2016), “an international migrant is a person who is living in a country other than his or her country of birth”. Terms such as “environmental migrant” and “climate refugee” are also controversial (see Kraemer 2017, see the working definition in IOM).

2 In order to analyze the nexus between food and South-North migration, we have focused on five main areas: Central Europe, Mediterranean Europe, Middle East, North Africa and West Africa, and we have selected 13 countries as major geopolitical players.

3 According to a Ipsos MORI global survey in 2014, related to 14 countries, the average guess was that 24% of the population was born abroad, when the real figure is 11% (See https://www.ipsos.com/ipsos-mori/en-uk/perceptions-are-not-reality-things-world-gets-wrong).

4 The Sustainable Development Goals (SDGs), also known as Global Goals, build on the experience of the Millennium Development Goals (MDGs) to go further to end all forms of poverty. They require action by all countries to promote prosperity, social inclusion and to protect the planet. The 17 SDGs officially came into force on 1 January 2016. 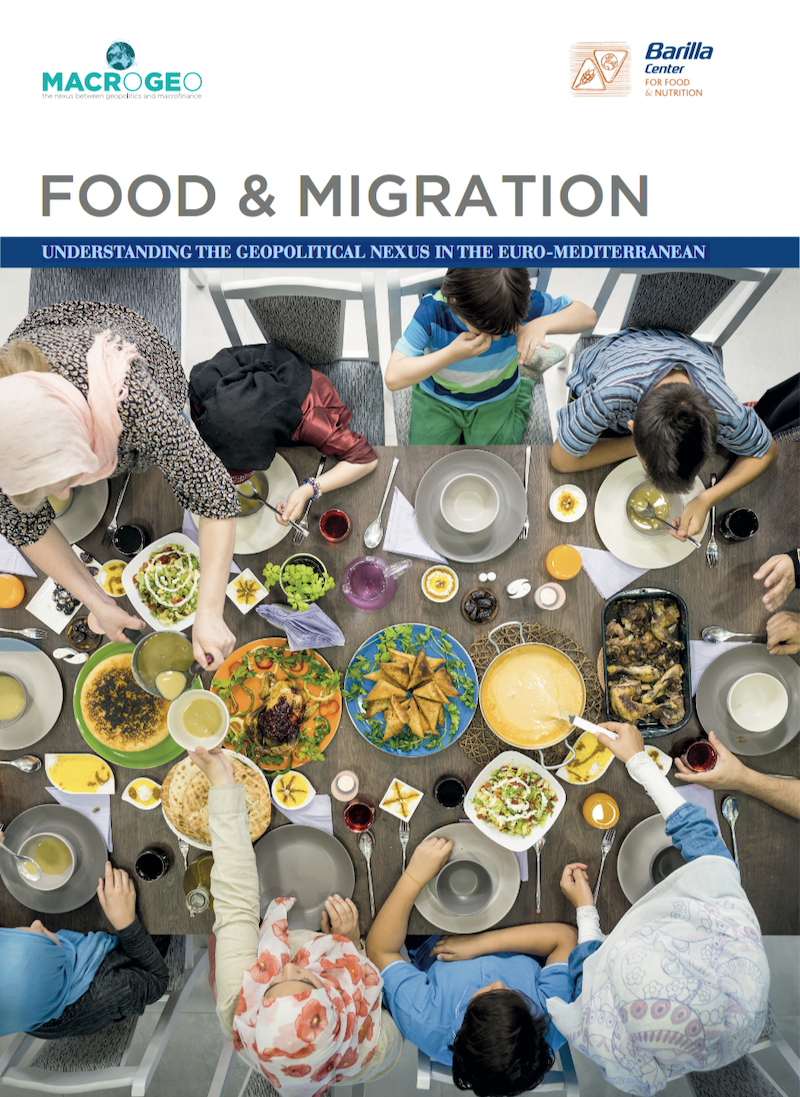 Understanding the geopolitical nexus in the euro-mediterranean.